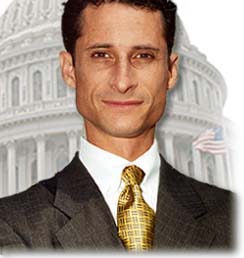 Attempting to write about the general cosmic energy of an eclipse is challenging at best, but sometimes the media works perfectly in providing material that expresses the eclipse energy in a profound and universal way.   I am sure that everyone has heard about the scandal involving U.S. Congressman Anthony Weiner (D-NY).   The report of his ‘netsexting’ infidelities have appeared in every news outlet from the New York Times to CNN to TMZ – it is virtually (no pun intended) everywhere.  Over the next few weeks many stories will be written that have the tone and feeling of the eclipse.  The focus might be on what Weiner has done with his “wiener”, and whether or not he resigns from office.  However, despite the collective coloring, the eclipse beckons us to question the larger picture, and to realize that it’s not about the “wiener” it is about us.

So, what exactly is a lunar eclipse?   In astrological terms, a lunar eclipse is an opposition between the Sun and Moon.  In this case, the Sun is in the sign of Gemini and the Moon is in the sign of Sagittarius.   Since a lunar eclipse focus is on the Moon (a solar eclipse focus is on the Sun) we will find many of the same attributes that occur during an ordinary Full Moon – just highly amplified and focused on larger groups of people.   It is common during lunar eclipses for coup d’états to break out, earthquakes and other weather phenomena to occur, riots, epidemics such as flu outbreaks (especially if Neptune or the 4th and 6th house are involved), or any other spontaneous eruptions from the general population.   For example, the last lunar eclipse at 29 Gemini/Sagittarius and its involvement with laws, legislation, and legal matters spawned the labor strikes in Wisconsin, and the standoff between Governor Walker and his democratic opposition.

The current lunar eclipse also occurs across the Gemini/Sagittarius axis, however this time the Sun is in Gemini and the Moon is in

It’s All About The Houses:

For our friends in the United Kingdom, this eclipse is conjoined to the Ascendant/Descendant (1st and 7th house) axis; this reflects a need for the UK to analyze its relationship to the outer world.  Moreover, possible problems with foreign relationships could arise.   This is a rather interesting hotspot that we should keep a very close eye on.  In the United States the eclipse lands across the 2nd and 8th houses.   On the surface this will highlight issues regarding finances, money, taxes, taxation, debt, credit, possible intense political battles which will result in a resolution (debt ceiling), and that little dirty word – sex!  Expect many of these issues to come to the forefront over the next several months, but pay very close attention to July 25, 2011, November 9, 2011, and December 12, 2011 as hotspot days.  Other countries that are highly sensitive to the eclipse are Afghanistan, Australia, France, and Israel.

As I stated earlier, an eclipse that lands in the 2nd house has much to do with finances, a countries worth, and what we place value upon.   One of the most common keywords for the 2nd house is, “I have.”   We can make predictions based on these surface issues and experience a high level of accuracy, but what does this 2nd house really mean?  At the deepest level the 2nd house reflects our self worth and our value systems.  Howard Sasportas in his groundbreaking book, “The Twelve Houses,” has this to say about the second house.

“We base our whole existence on what we value.  When our values change, our whole life focus can alter dramatically.”

The Sagittarian lunar eclipse in the 2nd house has to do with a value system that is often larger than life.  Sagittarius is a “my way” or the “highway” type of sign, after all its ruler is Jupiter who had a zipper problem of his own) the King of the Gods.   The religious underpinnings that exist with Sagittarius are cropping up all over the place as changes are occurring to our current establishment – and such long existing laws such as “Defense of Marriage Act,” and “Roe V Wade,” have begun to resurface.   Further, we are more focused than ever on what people are doing with their sexual organs – whether it is Arnold Schwarzenegger, John Ensign, Tiger Woods, Jesse James, or the recently exposed Anthony Weiner.   In many ways, our countries evening dinner of religious idealism has created a rather sexophobic atmosphere,   which repudiates anything beyond the missionary position unless it is happening in their bedroom.   In America, sexophobia casts a very large shadow!

The lesson(s) of this eclipse straddling the 2nd and 8th house axis is not really about money, sex, out-dated archaic laws,  or worn-out religious morals that are the inheritances of a time long past, yet an invitation for us to explore our values.   What do we really value?    Further, how do our values add to the larger collective?  At the end of the day, what we truly value is what we have, and in many cases the only thing we have is ourselves.   It’s time we make the most of it!

Take all the court cards out of your tarot deck and shuffle them.   Ask the Tarot Court, what do I really value?  Pull a card from the deck.  Let me know what you pulled!

Storm Cestavani is a psychic, tarotist, and humanistic astrologer with over 20 years’ experience.   He is the original “Cosmic Weather” forecaster and is available for both psychic and astrological consultations.  Nothing is too personal, and nothing is too hot for Storm to handle!   To schedule an appointment with Storm simply order the reading you would like, and Storm will contact you to set up your reading.  In order to accommodate work schedules Storm is available for evening and weekend consultations.