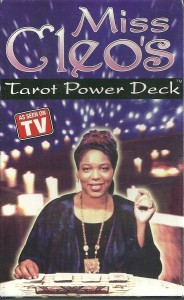 How many of you remember that line and who made it famous?   Ms. Cleo, of course!   How many people actually know the truth surrounding her story?   Was she really a fraudulent woman just out to get money from helpless victims?   Or was she as much of a victim of Access Resources, Inc., as the callers were?    Further, a decade after the commercials that featured her were taken off the air she is used in countless advertisements for other psychics and psychic lines (usually promoting her as a fraud and them as legit) and she has firmly planted her feet in the ground of modern day psychic pop culture.

Let me give you some background:

In the late 1990s Harris had a career with the Psychic Readers Network (note by Storm:  they use Psychic Friends Network, yet Cleo was never a spokesperson for Psychic Friends Network, as it was out of business at the time of her commercial airing – I have corrected the error here) using her middle name Cleomill or Cleo. After working as a phone operator for over a year, she appeared as a televisioninfomercial psychic in which she claimed she was originally from Jamaica. She was paid $1700 for her first infomercial and paid a flat fee for each commercial she appeared in thereafter. The Psychic Readers Network company coined the title “Miss Cleo” and sent spam e-mails, which stated, “[Miss Cleo has] been authorized to issue you a Special Tarot Reading!… it is vital that you call immediately!…”[citation needed]

According to the FTC, Access Resources, Inc., made approx 1 billion on its psychic based services.  It began as a competitor to former psychic giant Psychic Friends Network, which featured Dionne Warwick, but its early attempts vastly failed.  After reorganizing and reforming as Psychic Readers Network, they became much more popular using spokesperson Billy Dee Williams, Catherine Oxenburg, Phillip Michael Thomas, and other has been celebrities.    Eventually it went on to do Psychic Talk USA with Bo Griffin and its last marketing campaign was featuring Ms. Cleo.

Now let me backtrack just a moment.   As I am sure that many of you are wondering why I know so much about this subject.   In 1990, I answered an advertisement in Body, Mind, and Spirit Magazine for psychic readers.  The line I was currently working for at the time ran by Katrina Kern was coming to a conclusion and Gale Summers was starting a new venture with a company called Infomation.    This eventually lead to a short spree of commercials and infomercials.   The success of these commercials led Information to ditch Summers (another psychic used terribly by the industry) and began working with Linda Georgian.    Linda Georgian through her connections with Margie Cowen in Florida got in contact with Dionne Warwick, and co-founded the Psychic Friends Network.    This is a company that I spent 7 years working for helping and assisting the clients that were calling.   In 1992, I was invited to be on the 3rd infomerical for this company, where I read for Dionne Warwick on the show, and garnered a bit of attention from their media executives, who were putting together a Radio Show called, “Psychic Friends Live”.  I went on to host this show with Shari Elliker.   I eventually left Psychic Friends Network (along with Linda Georgian and Dionne Warwick).   Although the original concept and the original management I supported and felt were ethical and honest, eventually greed and fear of PRN, created an environment I was no longer able to support.

After leaving Psychic Friends Network and a successful radio show, and returning to private practice, my manager was approached by Access Resources, Inc., as to my interest of hosting a talk based psychic infomercial where I would be the “central” psychic figure of the show.  My manager received the contract and after exploring it I was aghast at what was in it.   In essence, the contract paid very little (I believe they offered me $3,000) for the original infomercial and a flat fee for infomercials after.   In addition, they purchased the rights to use my name, my marquis value, and likeness in any advertising materials that they wished to use (and of course, it would be a huge coup for them to score one of PFN’s spokespeople, as Linda Georgian was also approached).  I virtually had no control.  Of course, I turned them down.    About 6 months later, the infomercials with Bo Griffin appeared on TV followed shortly by the birth of “Ms. Cleo”.

Eventually Access Resources, Inc. was charged with violating many FTC rules, which would eventually change the landscape of the Psychic Industry.

I do feel that Ms. Cleo was guilty of something.   She was guilty of getting involved in an organization that she did not research.  I psychically feel she was guilty of allowing media fame and glory (and she only got paid $1700.00 – what the hell was she thinking??)  to override her sense of ethics and morals.   I do feel that the image created for her by Access Resources, Inc. has damaged the psychic industry and puts a question of legitimacy on all of us.    However, I believe that the guilt of misleading and misrepresenting people was the fault of the company, since all charges against Ms. Cleo herself were eventually dropped.    Ms. Cleo, in effect, had no control over the way they promoted her, the way that they viewed her, and the way she was presented to the public.   Her image and likeness was used to flood phone banks, junk mail, spam mail, and other devices to promote people to call – all of which she probably was not aware of.   In fact, her psychic abilities have never been questioned (as who can really question them) it is only her image of being a Shaman that was proven to be false, an image that the company created for her for marketing purposes.    (On a side note, I have watched several of the infomercials I could find on the web to write this blog, and her reading of the tarot seemed rather accurate, she did know what the cards meant and how to read them, whether this was orchestrated by a script or her real psychic knowledge that I do not know.)  In essence, everyone was damaged by Access Resources. Inc. (including the handful of legitimate psychics that worked for them that lived in a constant state of fear of losing their jobs) including Ms. Cleo.

My purpose for writing this was actually inspired by another reader on Keen who commented on my first blog.   We are in control now of how we present ourselves to the public and how we run our own businesses, which is why my personal choice is not to use disclaimers of entertainment on my pages.    We are no longer psychic-robots controlled by a dictatorial company.   More importantly, Keen.com has provided us with a platform for all of us to be unique and independent.   I personally am grateful!   The future of the psychic industry is now up to us to mold and shape into what WE want it to be.   Let us take this seriously!

(I am interested in hearing from others on how they feel about the Ms. Cleo situation, whether you worked for Access Resources., Inc or on ideas about how to present ourselves to the public.   Let us lead the charge for improvement and empowerment of not only our clients, but an industry we love as well).